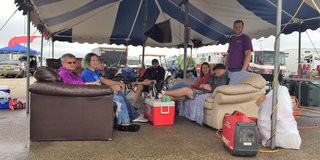 The Pros of Solo Nats -- Pirelli World Challenge Champions Randy Pobst and Tom O’Gorman both came back to the 2018 SCCA Solo Nationals with previous championships under their belts, and both got caught up in the tough conditions on day one leaving them with gaps to make up. O’Gorman, driving in F Prepared, finished day one in sixteenth place and rallied to finish tenth with the fastest-in-class day two time, showing the “what might have been” way.

Pobst, driving in F Street Prepared, fared better than O’Gorman, splitting his three runs over two days in wet and dry conditions and has a dirty run and a DNF on the results sheet to show for the trying conditions. Going into the west course later this afternoon, Pobst has just under two tenths of a second to make up if he wants another Solo National Championship.

Change is Exciting -- Ron Ver Muln, best known for being the Hoosier Racing Tire distributer at Tire Rack Solo® Nationals, has had a pretty solid week -- and accomplished something not seen in a while. In the rain yesterday, Ver Muln took a hefty three-second lead over the rest of the E Modified (EM) field. Today, he held the pace in his 7/8 scale Chevrolet Camaro, but the car wouldn’t start when the time came for third runs, and his fastest run was with two cones. In the heat of the moment, Jeff Kiesel, 11-time reigning EM National Champion offered his open seat to Ron. On his third and final run, Ver Muln came within 0.2 second of matching his raw time in his own car and was able to secure the win. This is the third SCCA Solo Championship for Ver Muln and the first since his 2005 win in C Prepared.

Ain’t No Party Like a Solo Nats Party -- Sure, the Tire Rack SCCA® Solo Nationals Championship brings together some of the best autocrossers in North America for top-flight competition to decide who claims National Championships and bragging rights.  But the event is so much more.  It’s a chance for friends from around the country to reconnect, and a great opportunity to PARTY!

Street Modified competitor Tim White is one of the “party planners” from the Central Carolinas Region. This year, a couple SCCA regions out of the Southeast have joined together to construct a tented party center with several couches and, of course, a uniquely engineered blender used to concoct world-famous Trasharitas.  How much money did they spend on the couches?  Zilch -- they were all gathered from the side of the road. Are Trasharitas popular?  Well, 10 gallons were polished off by the hoard of partygoers Tuesday night -- so you be the judge.  And 100 lbs. of smoked pork butt, along with 30 lbs. of smoked sausage, were consumed during the gathering.

Sorry you missed the blowout?  Luckily, the combined region activity will go down again Thursday night, along with lots of other parties scattered throughout the massive Solo Nats paddock at Lincoln AirPark in Nebraska.  Be there or be square.

Photo: The “Party Central” compound for several SCCA regions out of the Southeast, and location of the famous Trasharita blowout.